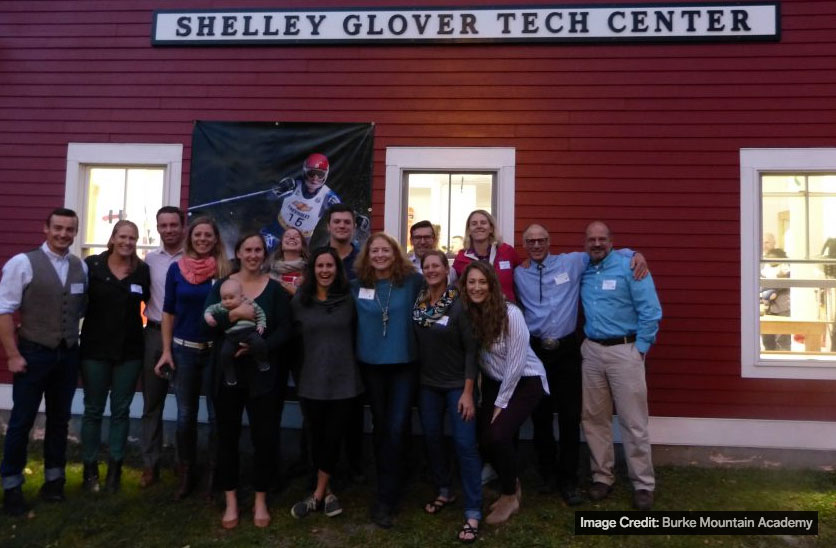 Shelley Glover ‘04 was a gregarious Burkie, who embodied a passion for excellence and an exemplary love of life. To the great sadness of her family and all of those who loved her, she passed away in 2004 from injuries sustained while training as a member of the U.S. Ski Team.

On Oct. 15, 2017, the Burke Mountain Academy community gathered as part of the annual Parents’ Weekend to celebrate Glover’s legacy through the inauguration of the Glover Tech Center (GTC) – a cutting-edge facility dedicated exclusively to ski racing equipment preparation.

“The GTC represents all that we stand for at BMA, namely a relentless commitment to making sure our student-athletes have access to the best resources to attain their fullest potential,” said Head of School Willy Booker ‘96. “Our high performance model makes it clear that in addition to striving for being at their fittest, having the most resilient minds, being guided by the best coaches and training on top hills, making sure our student-athletes have the best possible equipment is another of the essential pieces of the puzzle that supports their journey to excellence. It’s a true honor to be able to associate this exciting project with Shelley’s strong and positive legacy at BMA.”

Thanks to a major investment of approximately $250,000 and following the successful recent opening of the Ronnie Berlack Center (RBC) – BMA’s best-in-class indoor training – the academy was in a position to completely redesign its former athletic training space to create a new infrastructure dedicated exclusively to ski racing equipment preparation.

In addition to featuring individual ski lockers for each athlete as well an increased number of tuning benches equipped with safe, timer-operated electrical outlets thoughtfully hanging from the ceiling, one of the key highlights of the GTC is the Montana Saphir B Robot.

The Montana Saphir B is a dual feed automated stone grinder designed specifically for race services. With it, we’re able to fully customize our grinds and structure patterns to best meet the needs of BMA athletes. The quality and consistency of the Montana stones produce consistently clean grinds, allowing bases to better take wax and get up to speed quicker than standard recreational shop machines. The Saphir allows us to control all equipment variables, bringing consistency and precision to BMA athletes resulting in better performance.

“In a sport with so many variables, it’s important to control the few that we can.  The resources in the new Glover Tech Center bring world-class ski tuning in-house to BMA athletes.  We’re able to provide world-class tunes and new ski preps to our athletes to assure the highest level of quality and consistency,” said Steph Darling, GTC Director of Equipment and Tuning at BMA.  “It’s exciting to carry on Shelley’s legacy, growing up racing with Shelley, I look forward to carrying on the traits I remember most about her, her positive energy, work ethic and taking care of the little details.  It’s an honor to launch the BMA High Performance Equipment Initiative in the newly renovated GTC and I look forward to witnessing the growing success of our BMA athletes.  What an exciting time to be a Burkie!” added the experienced technician who has more than 20 years in the ski racing industry including a few seasons on the FIS Ski Cross World Cup and Jeep Tours, and current owner and operator of her own elite ski tuning business, RTuning.

REMEMBERING SHELLEY
Shelley was born in Madison, Wisconsin. She raced at Tyrol Basin Ski Area before attending BMA from 1999 to 2003. In 2002, she joined the U.S. Ski Team’s development team. That year, she was the Eastern Junior Olympics giant slalom champion in addition to achieving several top-five finishes in international-level (FIS) races.

She passed away from injuries sustained in a ski training accident in 2004. Her legacy lives on through the Shelley Glover Foundation which seeks to increase access to athletic opportunities and competition, advocate for improved safety and injury prevention, improve the quality of life for children through participation in sports, and assist children in strengthening their physical and emotional health.

“One of my favorite photos of Shelley at Burke is her class picture,” told Rich Glover to the BMA community members in attendance for the inauguration. “It’s a black and white photo. She is standing dead center in the standing row, head up, looking ahead, with a big, joyous smile, with her arms out around the two women flanking her, embracing them, really embracing the whole class. Very happy. Very content.”

“When I see that photo I also see her embracing the idea of BMA and all of those who came before her. Students, teachers, coaches. All who have embraced, committed fully and made a contribution to this idea. I see her embracing all of you who are here now, and all who will come here in the future to follow your dreams here. I think she would be comfortable knowing that is what you all see and feel when you walk into this beautiful building.” 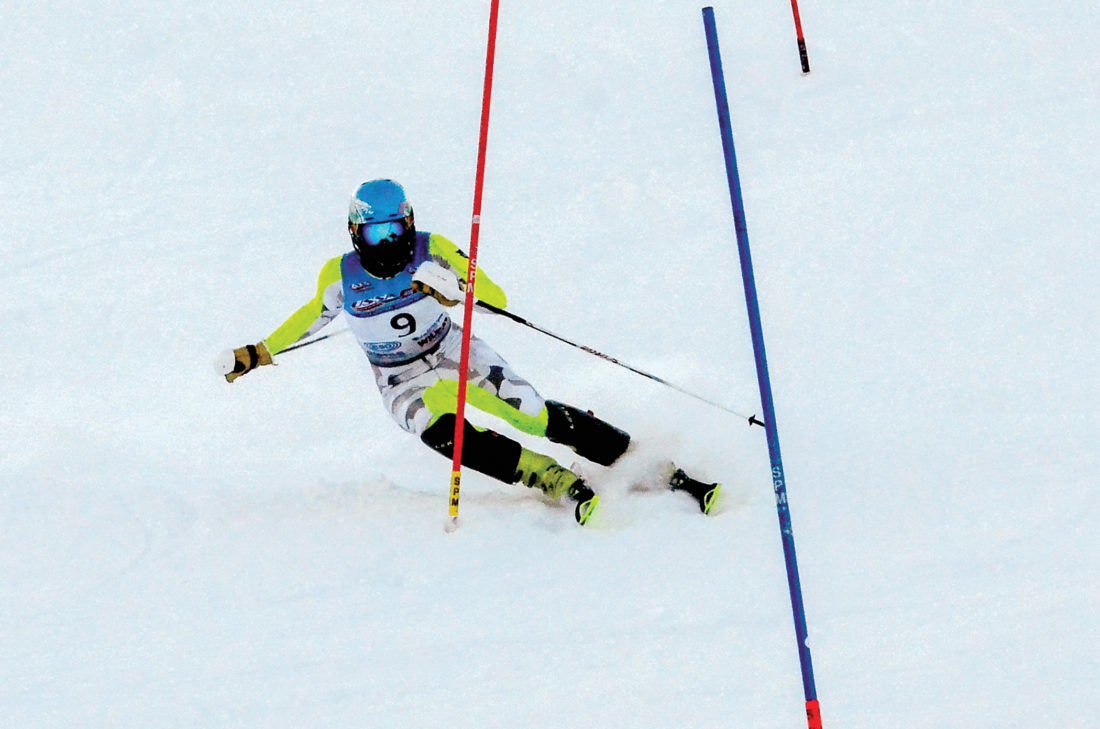 MARQUETTE — Competitors from the Great Lakes Ski Academy did well in a weekend race at their home Marquette Mountain during the annual Shelley Glover Memorial Race from Jan. 13-15.

GLSA skiers took nearly all the podium spots that included more than 200 skiers from around the U.S. Ski Association’s Central Region.

Glover was a member of the U.S. ski team who came from the Central Region and was killed in a training accident in 2004. This race is held annually at Marquette Mountain and features a series of speed events, slalom and giant slalom. For the last two years, it has also served as one of two qualifying series for the Under-14 and U16 Rocky-Central Junior Championships.

U14 racer Hayden Kauppila was a quadruple winner on the weekend, taking first in his age group in all four events contested — super G, alpine combined, slalom and giant slalom. Kauppila’s U14 teammate, Logan Audette, was third in both super G and alpine combined.

Brad Seaborg was a double winner, taking the U19 slalom and GS. Seaborg was joined on the podium by teammates Eric Gencheff, who was runner-up in slalom, and Drew Thomas, who was third in GS. GLSA’s U19 athletes did not compete in super G or alpine combined. 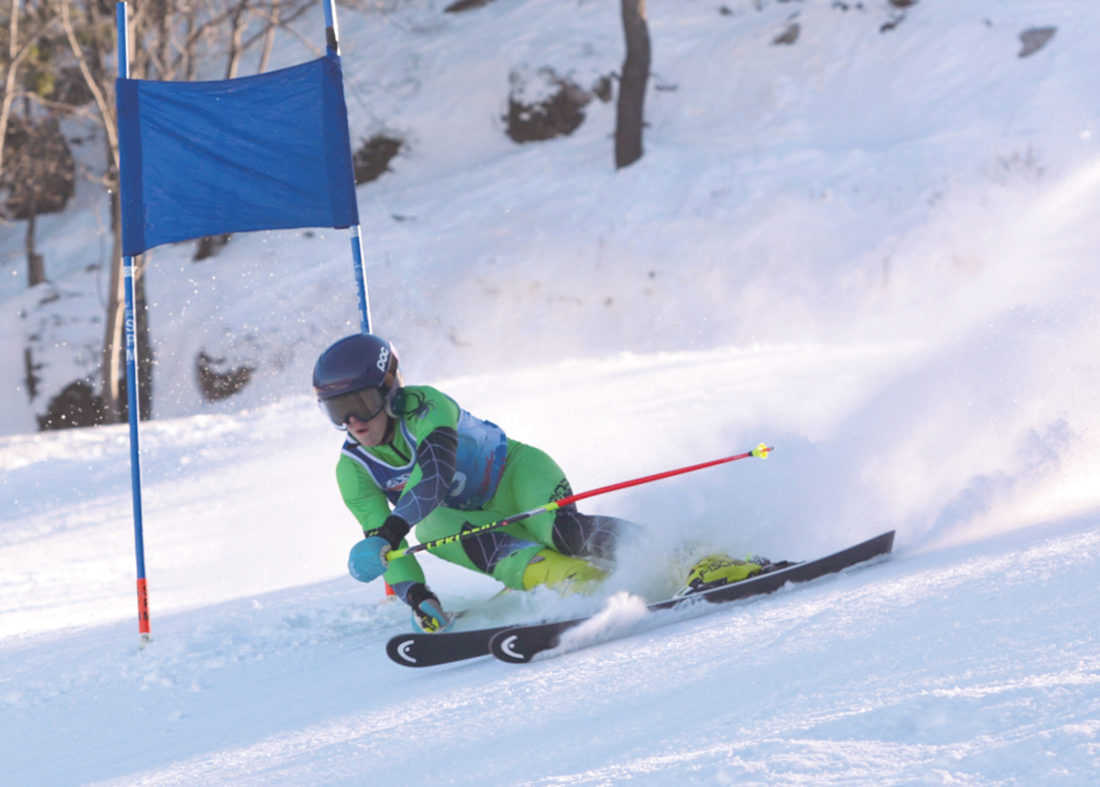 U16 skier Ainsley Kirk had a strong weekend on the female side, winning GS and coming in second in super G and slalom. Teammate Sadah Scheidt also won the U19 slalom.

GLSA’s younger athletes had a strong showing as well. U12 racer Anna Grzelak was second in the kinder kombi and GS and third in the slalom, while Cole Johnson grabbed a fifth place in the boys’ U12 slalom.

This year the Shelley Glover Foundation is pleased to offer a $1000 ski racing scholarship to an exceptional Midwest student ski-racing athlete. The award will be determined by the SGF Board of Directors and presented at the Shelley Glover Memorial Ski Race on January 15, 2016.

Each January, the annual USSA Shelley Glover Memorial Ski Race is hosted at Marquette Mountain, located in Marquette, Michigan. During the three-day event ski racers in the Under-8 and Under-14 divisions compete in slalom, kombi and giant slalom, and racers in the Under-16 division compete in slalom, downhill, and giant slalom. Once again organizers anticipate it to be one of the best attended races of the year in the Central Division/Region 2 as it is now also part of a qualifying series.

Beginning in 2006, the Shelley Glover Foundation has awarded annual scholarships at the Shelley Glover Memorial Ski Race to exceptional Midwest student ski-racing athletes who display qualities Shelley is remembered for. The athletes are recommended by their coaches and are required to submit applications demonstrating exceptional academic, team, and volunteer work.

Scholarships are made possible thanks to the support of our donors and the personal support of Rich and Carmella Glover. We thank all applicants, skiers, coaches and families who continue to make this race a great success. Please forward the scholarship application to any skier who you think may be interested and qualified. Thank you – we look forward to seeing you in January!